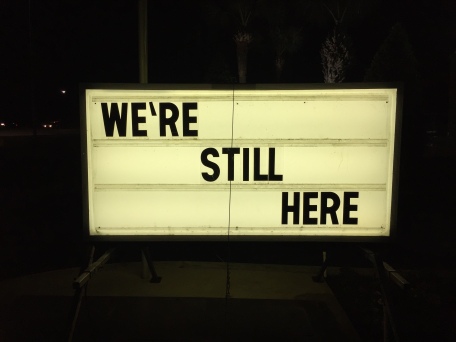 *The following is a lightly edited manuscript of a message I shared with the congregation of Winchester Friends Meeting in Winchester, Indiana.

Good morning, Friends. It is good to be with you and worship with you this morning. I was a little concerned because I’ve been under the impression that the Holy Spirit doesn’t interact with anyone until about 10:00 or so…so wasn’t sure about 9:15. But it seems like maybe the Spirit just makes an exception because you are such a great bunch. Or maybe it’s just that I’m not a morning person. It’s a mystery…

Speaking of the Holy Spirit, one of the important roles of the Spirit that Quakers have emphasized is that of One who assists us in the task of interpreting scripture. And over the last couple of years there has been a passage of scripture which the Holy Spirit has been unfolding to me and within me–layer upon layer. That passage of scripture is, of course, the one that Ron read for us just a minute ago.

Most recently, this gospel story has become a kind of parable about the process of renewal for rural communities. Something you may have thought about or be concerned about. Exploring how we can seek shalom for our rural communities has been a concern of mine for awhile, particularly since I moved back to Ohio about 2 years ago.

For the sake of brevity and simplicity, I want to focus on one particular tension in the text and a tension you may experience in your context. There are two facts that are repeated in the story, stated multiple times for emphasis.

One is the kind of place. The location, the setting, the context–the geography and topography. We tend to think of setting and place as relatively unimportant. Background for characters and the action, not much more than throwaway details. But they are much more than that. Biblical stories often make specific mention of the kind of landscape in which the story takes place–in a cave, under a broom tree, on Mt. Sinai, in the Garden of Eden or Gethsemane. These are details worth mentioning because they are not just background to the main characters, they are actually characters in the story. Just ask Moses if the burning bush was a minor detail or ask Jonah if the giant fish was a backdrop to his transformational journey. No, the place and setting are members and characters in the story, in and through which God is moving the narrative of redemption forward. They can also be reflections of the interior landscape of an individual or a group.

So, what is the setting and landscape of this story? It’s clear from the beginning. Jesus tells the disciples: “come with me to a quiet place (NIV) or a deserted place (NRSV) and get some rest.” Then we are told in the very next verse: “so they went away in a boat to a deserted place (NRSV) or solitary place…” Then, a couple verses later, when the crowd starts to get hungry, the disciples notice it’s getting late and Jesus is still teaching. So, they say “Good stuff, Jesus, but I think it’s time for everyone to move along.” Why? Because it’s late and because, you guessed it, “this is a remote place (NIV) or deserted place (NRSV).”

The Greek word used here is eremos, often translated as “desert” or “wilderness”–as in, the place where John the Baptist preached, where Jesus was tempted, and where Jesus often went to rest and pray. In the biblical landscape, the desert is rarely the desert as we imagine it, with blowing sand and cacti. Instead, it is a place that is considered uncultivated, uncivilized, and uninhabited. I love how the translations vary: it can be peaceful, simple, and quiet or barren, lonely, and deserted. God-filled or God-forsaken, depending on who you ask. Pretty much the definition of a “rural place.”

Okay, so that’s one characteristic of the setting and story that the gospel author emphasizes. It’s a quiet or deserted place. The second is this: the crowd is large. It is a huge and hungry crowd. As soon as Jesus and the disciples get on the boat and leave for their contemplative retreat, we are told that “many people” recognized them and followed them to hijack the retreat. In the next verse, when they arrived at the other shore, it says that Jesus saw a “great crowd.” The disciples note that the large amount of money required to feed such a large crowd. And the story itself isn’t called the Feeding of a Few Friends but the Feeding of the Five Thousand (and that’s only counting the men.)

The combination of these two factors creates what I like to call the Paradox of Rural Life: There is a simplicity and beauty to our small towns and rural landscapes but there is also a host of hidden pains that are often unseen but unavoidable. This story is a reminder that sailing away to a quiet, rural place won’t ultimately provide an escape from the pain and desperation of our society. Far from it. While rural America used to represent the ideal of strong communities living the American dream–salt of the earth and heart of the country–it is now being called the “new inner city.”

“In terms of poverty, college attainment, teenage births, divorce, death rates from heart disease and cancer, reliance on federal disability insurance and male labor force participation, rural counties now rank the worst among the four major U.S. population groupings (the others are big cities, suburbs, and medium or small metro areas).” The decline has only been accelerating since the 1990s.

Jesus, on the other hand, looks at the situation and sees the making of a miracle. He sees a hidden abundance in the people and the place.

Thankfully, the disciples are there to provide some common sense. There are too many people; it’s too expensive; it’s late; we are in the middle of nowhere. The only solution, they knew, was to send them away. They can figure it out or fight it out. They just need a different place. Even more, they needed a different kindof place. Send them out yonder where at least they have villages!

We hear these kinds of sentiments all the time from people when they look at people in rural communities. Who would want to live there?

It’s the middle of nowhere.

Just a bunch of cornfields.

A great place to be “from.”

Somewhere you drive “through.” To get somewhere else.

J.D. Vance, in his book Hillbilly Elegy, wrote: “Americans call them hillbillies, rednecks, or white trash. I call them neighbors, friends, and family.”

A couple months ago, I watched a documentary called Look and See, about the life of author, social critic, and farmer Wendell Berry. It’s about farming and rural America and Berry’s own journey & way of seeing the world. In the middle of the film, Berry said something that struck me. He said:

“The great cultural failure we have made here in the United States is to mistake millions of individual small places, with their own character, their own needs and demands…for nowhere.”

Perhaps, we need to reframe that phrase “middle of nowhere.” If we break the word nowhere into two parts, we discover a trite but true phrase: “now-here.”If this is God’s world, filled with divine presence, and constantly unfolding in the divine process, then the place we find ourselves is a good place, an important place, a holy place.In fact, when we are shaped by the prophetic imagination of scripture, we realize that it is often the undervalued and unexpected places where God is discovered and revealed. It is often those places considered to be the “middle of nowhere” which are actually the middle of the “now-here” of God’s presence and activity. The middle of the “now-here” of the work of repair and renewal. The middle of the “now-here” of revelation and guidance.  And that is a good place to be.

“They do not need to go away. You give them something to eat.” (repeat)

I don’t know you all very well yet, but from what I gather, you are a community that has heard the Living Christ say this to you and you have responded faithfully. You heard Christ say: “You give them something to eat.” And you said: “Okay, what do we need to do next?” As I understand it, your willingness to be responsive to this calling has opened up some pretty cool opportunities and relationships (food pantry, etc.). 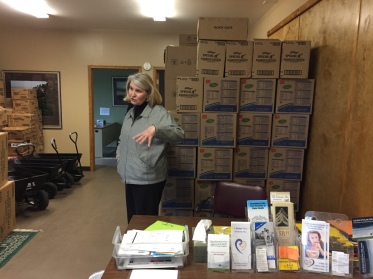 This gospel story teaches us that miracles are possible when we believe that the abundant life Jesus offers is possible anywhere and are willing to be partners in bringing it about. Sometimes, we are like the young boy (described in the gospel of John’s account); we offer the resources that we have to kingdom work. Other times, we are like the disciples; we take what we are given and share it, ensuring that everyone has enough. There may be times that we are like the hangry members of the crowd; we have to humble ourselves enough to receive the nurture and nourishment we need from others. And dare I say that we may even become like Jesus; learning to see the abundance of each place and its people and teaching others how to look at them and see the makings of a miracle.

So…next time someone says something disparaging about your community or rural places, remember that you are in the middle of the now-here of God’s presence and kingdom activity. Remember the abundance hidden among you. Remember your responsibility and the opportunities for local miracle-making.

Remember this also, the next time you are tempted to believe you don’t matter because you are too far “away from the action.” Of course, there are times for going right to the sources and centers of power to work for change. That’s why we have organizations like FCNL. But I’m helped by the words of fellow Quaker and Hoosier Scott Russell Sanders:

“For all my convictions, I still have to wrestle with the fear–in myself, in my children, and in some of my neighbors–that our place is too remote from the action…I deal with my own unease by asking just what action I am remote from–a stock market? A debating chamber? A drive-in mortuary? The action that matters, the work of nature and community, goes on everywhere.” The work that matters is going on right here, right now.

As we enter a time of open worship, I would like to offer you a few queries: